The presentation ceremony of the FACET Atlas was held on April 5, 2011 at the Grand Hotel in Kinshasa. It was chaired by His Excellency José Endundo Bononge, Minister of the Environment, Nature Conservation and Tourism of the Democratic Republic of Congo (DRC), His Excellency Mr James ENTWISTLE, U.S. Ambassador to the DRC and Mr. John Flynn, Director of the Central Africa Regional Program for the Environment (CARPE). 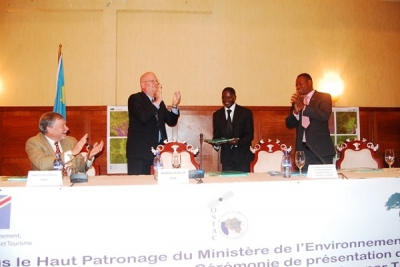 During the ceremony took turns speaking, the U.S. Ambassador, the Minister of the Environment, Nature Conservation and Tourism, the Director of the Directorate of Inventory and Forest Management (DIAF), Mr. Sebastian Malele and the Director of the Satellite Observatory of Central African Forests (OSFAC), Mr. Landing Mané. 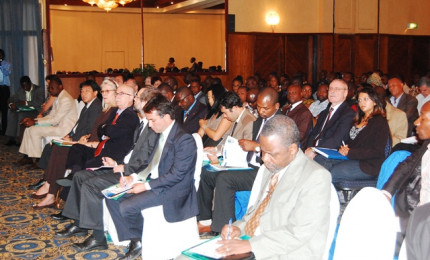 From the outset of his speech, the U.S. Ambassador, His Excellency Mr. Entwistle, was delighted to attend the presentation ceremony of the FACET Atlas, a modern tool in line with the vision of President Barack Obama for the use of modern technology in the development perspective.
Mr. Entwistle said that the United States attach great importance to the protection and management of Central African forests that make up the second forest block in the world. This interest is manifested through of USAID / CARPE, USFS and NASA activities.
His Excellency was pleased that an organization with a regional mission (OSFAC) supported by the American universities (Maryland and South Dakota State), NASA and USAID / CARPE be able to use ICT to monitor and manage natural resource in Central Africa.
Mr. Entwistle closed his speech by reaffirming the U.S. commitment to continue to provide support to initiatives related to sustainable management of Congo Basin forests.

In his speech, His Excellency Mr. Endundo Bononge congratulated OSFAC and its partners for the implementation of FACET / DRC, welcomed the presence of U.S. Ambassador to the ceremony and thanked USAID / CARPE for its multifaceted support to the Ministry which it is responsible.
He stressed that FACET will be a great contribution in three areas: control of logging, land use planning and monitoring of climate change through the Reduced Emissions from Deforestation and Degradation (REDD+). The Minister concluded his remarks by thanking the U.S. Government and its organs of cooperation and encouraged the continuation of the FACET program.
Mr. Sebastian Malele, Director of DIAF recalled that his service is a Directorate of the Ministry of the Environment and the mission of the DIAF is to take inventory of forest resources, to propose forest management plans and to proceed with planning land use.
He then listed the areas of collaboration between the DIAF, OSFAC and USAID through the U.S. Forest Service (USFS).
Mr. Malele stressed that the FACET program is of major importance in the monitoring of forests, because it reflects the extent of forest cover and its changes over time. This information he says can be used in several ongoing projects in DRC. 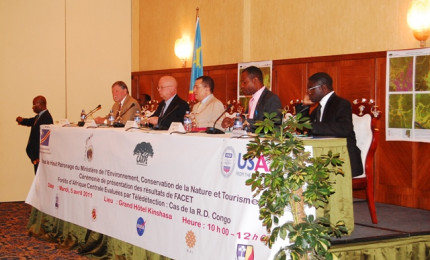 He thanked the support of development partners and called for the strengthening of national structures and data acquisition in the area of land monitoring satellite. Finally, he wished a good continuation of the collaboration between the DIAF, OSFAC.
After recalling the circumstances of the creation of the Satellite Observatory of Central African Forests (OSFAC) in 2000, the mission of the OSFAC, the technical and financial support of the Consortium partners NASA (UMD, SDSU, OSFAC) through the USAID / CARPE Program, the Director of OSFAC, Mr. Landing Mane presented the Atlas.

FACET (Central African Forest Remotely Assessed) is an OSFAC program whose main objective is to quantify the spatiotemporal dynamics of forest change in Central Africa through the use of multi-temporal satellite data. The series of multi-temporal data the FACET is a useful addition to many projects including the monitoring of biodiversity, climate modeling, conservation, natural resource management, planning for the occupation and the land use, agriculture, Reducing Emissions from Deforestation and Degradation (REDD), etc.
The publication of FACET is the result of close collaboration between OSFAC and its partners to map the extent of forest cover and its changes.
The method used is the “Wall-to-Wall”, a method developed jointly by the American Universities of the State of South Dakota and Maryland in the USAID / CARPE Program.

The Director of OSFAC said a multitude of information and statistics could be drawn from the FACET Atlas. He has presented and commented on some results, including the forest cover and loss in Landscapes, Protected Areas, forest concessions, provinces and around major cities in the Democratic Republic of Congo (DRC). 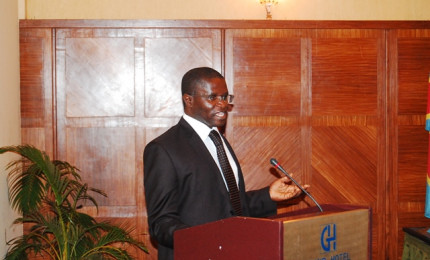 The provinces of Kinshasa, Kasai Oriental, Kasai Occidental and South Kivu are those who have lost most of forests between 2000 and 2010. Generally, there is a low rate of deforestation inside the protected areas and Landscapes; this proves the positive impact of actions taken by various departments, organizations or projects working in the field of conservation and rational management of forests.
Along roads and around cities such as Kisangani, Kindu, Mbuji Mayi and Buta forest loss has been very sensitive between 2000 and 2010.
Despite its low rate of deforestation compared with some parts of the world, deforestation in the DRC has increased slightly between 2005 and 2010 over the period 2000-2005.

The FACET Atlas is distributed freely upon request and can be downloaded at the following address: Read more...
In conclusion, the Director of OSFAC noted that after several years of research, the methodology the FACET has proved its reliability to be applied nationally or regionally. The results of the FACET Atlas can be used in several areas of planning, operation and management of natural resources.
As recommendations, he expressed the wish for: 1) improving the availability and accessibility of satellite data freely for all players in the Congo Basin, 2) the need to strengthen the capacity of national structures to allow them capturing these new information technologies such as remote sensing.

Finally, he praised the U.S. government policy is going in this direction with open access archives of Landsat images through the U.S. Geological Survey (USGS) and the commitment of certain international organizations to support the monitoring activities of forests in Central Africa.

To thank participants, OSFAC and its partners hosted a cocktail at the end of the ceremony. See more Photos