Since its inception, OSFAC provides Capacity building countries of Central Africa in Geographic Information Systems (GIS), Remote Sensing and GPS as well as technical support to all institutions that request. 869 persons, separately, from the universities (mainly the University of Kinshasa where the GIS Laboratory OSFAC is installed), national agencies, CARPE partners and international agencies have benefited from one or more training sessions with the OSFAC. 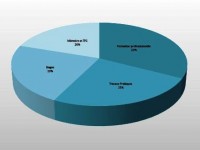 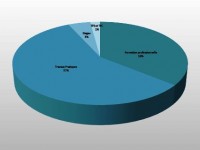 Total number of people trained from 2005 to 2010: A total of 1317 people have been trained by OSFAC during the period under study. The following figure shows the percentage distribution of all these people in relation to different types of training. Practical work, with 57% (755 people globally) are the first type, followed by professional training, with 36% (472 people); memories and Internships come in last place with 2% and 5% (28 and 62 people ). 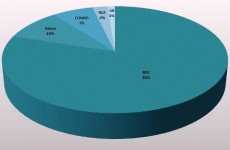 Number of people trained per country from 2005 to 2010: The previous figure informs that 80% of people trained through vocational training are nationals of the DRC, followed by 10% to 7% for Gabon and Congo Brazzaville. Nationals of France, Britain and Equatorial Guinea with each 0.30% have benefited least training.

Since its inception, OSFAC provides capacity building for countries in Central Africa Geographic Information Systems, Remote Sensing and GPS. Between 2005 and 2010, 1317 people OSFAC formed as follows:

Overall, it can be noted that although the number of trained men is higher, women are increasingly to master these tools to the decision. OSFAC will increase its support to countries in the Congo Basin, particularly national institutions in charge of forests and universities.