Analysis of deforestation and forest degradation in the republic of Congo

The training goal was twofold: capacity building and technology transfer in the project "Monitoring of forest cover change and Quantification of carbon stocks and emissions from forest degradation and deforestation in the forests of Republic of Congo.” 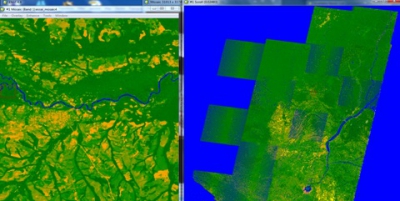 It took place at the offices of CGI (Centro de Geotecnologia do Imazon) of Imazon (Amazon Institute of People and the Environment), project partner, in Belém, Brazil, for about 15 days. The training focused on introducing the methodological approach for analyzing the Forest degradation and deforestation, based on the fractionation of the spectral mixture signatures of pixels "SMA" (Spectral Mixture Analysis) and the calculation of "NDFI" Index (Normalized Difference Fraction Index) using Remote Sensed images, Landsat TM and ETM in this case. This approach thus presented was implemented in the tool « ImgTools ». Tool developed by Imazon for quantitative analysis and dynamic of forest degradation and deforestation. ImgTools actually helps to produce results on the degradation and deforestation in four main steps, including sub-steps, namely:

The Haze Correction did not have much effect on the raw images. One can notice some effects, but not very major.

This step is largely dependent on the previous as it is important to have the best available images as Inputs. Clouds-Shadow and Water masks, in turn, were necessary and mandatory for the NDFI calculation.

These last two steps (C and D) were not addressed due to time constraints. They will be the next steps in the training opportunities for the coming months. But demonstrations on their use have been conducted to help understand how they work. However, a preliminary step to using ImgTools is performed on the ENVI software and consists of data preparation. It is mainly about the selection of Landsat bands useful for the analysis (Band 1-5 and 7) and the layers stacking. The analysis of the degradation was focused on the Landsat 7 ETM images of the years 2009-2010. Taking into account the presence of gaps on these images, the tool "Gapfill" to merge two images and fill these scratches, was used.

The procedure thus defined was performed on each scene of Landsat selected by the criteria of low cloud cover on one hand, and non-coincidence of the scratches on the other. The Gapfill, previously implemented to handle 8bit data (this is to overcome the problem of data volume), needs to be implemented to make it flexible for all types of data in ENVI. Note that this tool has been developed in MatLab. It can therefore be noted that some scratches still persists on images that has been applied Gapfill. In total, nearly 45 images have been prepared and 22 good images have been analyzed to cover the entire country. Mosaicking is finally applied to present the results of the entire Territory. A draft of the preliminary result on the 2009 NDFI of the Republic of Congo is appended.

The following tools and software were used in this course:

This is mainly the 2009 NDFI of the Republic of Congo (attached).

The perspectives for training are listed as follows:

Perspectives in equipment, software and personnel

Equipment and software are necessary for the implementation of different steps and achieving results. They are:

The involvement of 1 or 2 student(s) to support the Project Spatial Analyst to process the large amount of images data and producing results is a need for the smooth running of the project. It also has an advantage in testing the different tools and for capacity building.

This training session has the merit of bringing together a mixed team (Brazil, Congo-Brazzaville and Congo-Kinshasa). The following persons took active part in the success of this training workshop: